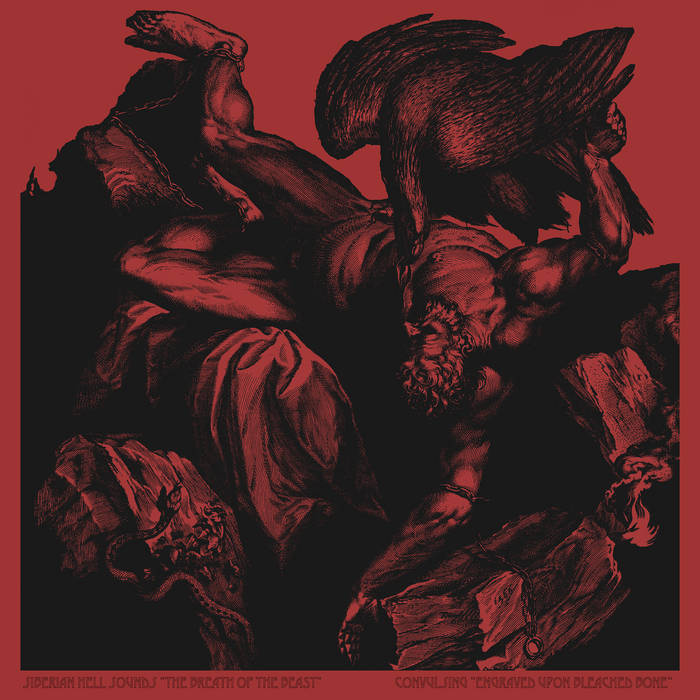 shoumeiki Amazing sound. So much energy. Love it. Favorite track: The Breath Of The Beast.

YomaBarr Convulsing is Convulsing, I just felt like getting me a piece of Convulsing, SHS I didn't know I admit with shame but from now on I'm a fan. These guys are... distorted. Good and mighty things come from down under.

Cheveu Miracle ××× The Breath Of The Beast : definitely my most listened-to song of 2020 ×××
Great discoveries. Violence is seduction. Siberian Hell Sounds takes you out for a walk around the neighborhood but it keeps morphing into abrupt sceneries of apocalypse.
↪ (blackened grind crust hardcore (SHS) & black death metal (C) / 2017 split / Australia (both) // (☑☑☑☑☑)² ) Favorite track: The Breath Of The Beast.
more...

Siberian Hell Sounds and Convulsing - two of Australia’s finest in extreme music - come together for a split LP on Art As Catharsis.

‘The Breath Of The Beast’ marks the moment when Siberian Hell Sounds transcended the sum of its parts, and emerged as a hypnotically heavy drone machine - more a cataclysmic force majeure than music.

Sounding like the bastard child of elusive French powerhouses Deathspell Omega, the almighty Polish Kriegsmaschine and the cabal of nationless demons known as Hexis, Siberian Hell Sounds draw influence from clandestine corners of extreme music while never adhering to the tropes of any particular subgenre.

Convulsing’s ‘Engraved On Bleached Bone’ exists as a bridge between two selves: between despondency and turmoil of the past, and the uncertainty of the present. It is a knife at the throat of a now-defeated enemy. A bloodied howl of contempt.

As the project of Brendan Sloan (Dumbsaint), Convulsing's 2016 debut 'Errata' made it's mark with an expansive combination of angular death metal, razor raw black metal, ambient menace and transcendent drone, drawing from names like Ulcerate, Dysrhythmia and Krallice.

Do not miss the cathartic excess of Siberian Hell Sounds' The Breath Of The Beast and Convulsing's Engraved On Bleached Bone - out now as a split 12" LP on Art As Catharsis.

SIDE A: SIBERIAN HELL SOUNDS

All music written and performed by Siberian Hell Sounds.

Thanks to Brendan, Lachlan, Simon, Budge, Bird, Dave, Damian, Kris, Eric, Tim, Asger, Filip, Tommasso, Victor, Geordie and anyone else that has supported us along the way, you know who you are.

Recorded, mixed and mastered in "Norway".

In loving memory of K.G. Bartlett.